13 out of 200: A Less-Than-Impressive Start to my Freelance Career 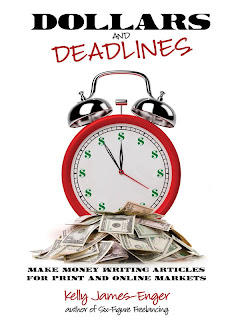 There's a big difference between seasoned freelancers and those just starting out, at least when it comes to marketing. Seasoned freelancers write much better queries than other writers. And new writers? Most of the times, their queries...well, they stink.

My first year of full-time freelancing, I sent out more than 200 queries to potential markets. (This is including resubs, but that’s still a lot of pitching.) You know how many of them actually sold? Are you ready? Thirteen.

Thirteen out of more than 200. That's not a bad number for a direct mail campaign, but it's not too impressive for pitches that were supposed to be targeted to specific editors and markets. If I started out freelancing today and had that kind of result, I don’t know that I could, or would, stick with it.
But receiving so many “bongs” (that’s what I call rejections) thickened my skin. I stopped taking rejection personally. Yes, I was still annoyed. Disappointed. Discouraged. Frequently disgusted, and occasionally depressed. But I knew it wasn’t a rejection of me, only of my idea. (And looking back, many of my queries were terrible. They lacked focus, they were poorly researched, they weren’t written with the magazine’s audience in mind. No wonder they failed!)
By using the 24-hour rule, I turned each of those bongs into two opportunities. I kept pitching. I kept trying. Yes, I was discouraged but I kept my hand in, so to speak. And eventually I started getting assignments—not only because I kept pitching but because my queries got better. Much better. I learned to think about what the editor might want in a pitch, to highlight my I'm-So-Great paragraph, or ISG, and to present a "package" that made it easy for an editor--even one new to me--to say "yes."

By my second year of freelancing, about one-quarter of my pitches sold, and that percentage continued to climb. (Today, more than half of the articles I pitch sell—and that’s a percentage I’m very happy with.)
I tell new writers that they will spend most of their time marketing until they start getting assignments. And that marketing doesn’t pay off until you get work. Well, that’s not quite true. Because the marketing you do makes you a better marketer. Write a lot of queries with the goal of improving your queries, and you will write better queries! And better queries=more assignments.

**This post was drawn was drawn from my book, Dollars and Deadlines: Make Money Writing Articles for Print and Online Markets. Order directly from ImprovisePress.com and use the discount code, IMPROVISEPRESS (all caps/no breaks) for 20 percent off of your order!

Finally, less than 24 hours left on my latest special offer for readers continues! Three of my most popular ebooks on Kindle are priced at only $0.99!