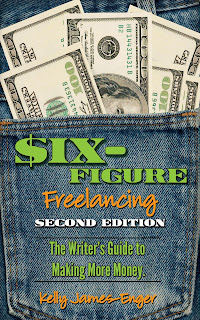 Ever wondered what six-figure freelancers have in common? If you’re new to the writing business, let me help you overcome the stereotype about freelance writers. Many people think of self-employed writers as:

Successful freelancers--including ones who make six figures, or more--shatter the stereotype of the writer as creative genius or daydreaming scribe. Yes, they're paid for their words. But their focus isn't limited only to those words. They present themselves as smart, savvy business owners who happen to write for a living. And I'll tell you that your demeanor and attitude can mean the difference between scraping by as a freelancer and making a good living.

I just spent the last three months interviewing successful six-figure freelancers for the updated, expanded version of Six-Figure Freelancing: The Writer's Guide to Making More Money, Second Edition. (It's currently available for Kindle and through Smashwords; Improvise Press will release the print version by March 30, 2013.) All of the writers have have been freelancing for more than a decade, and more than half have weathered more than 20 years in a highly competitive business—and continue to thrive.

Some write for corporations and businesses; some focus on writing books; others make the majority of their income from online publications. Some write for consumer pubs and others write for trades; many do both. They cover subjects ranging from biotechnology, to investing, to golf, to dog-friendly businesses, to martial arts. Some maintain speaking and consulting careers in addition to freelancing; others are more comfortable behind their desks. But despite their differences, they have many things in common.

Although racked with self-doubt at times, these successful freelancers have all learned to project confidence. When facing a changing business environment, they were able—and willing—to adapt, to grow, to learn new skills and pursue new opportunities. It's the latter quality that has sustained them and helped them succeed even in 2013, when the freelance marketplace looks very different than ten or even five years ago.

I interviewed more than two dozen freelancers back in 2003 for the initial version of Six-Figure Freelancing, which was published in 2005. When I reinterviewed one, only two were doing pretty much the same thing that they did a year ago. The rest had all changed their business models.

Some had all but abandoned writing articles for traditional media in favor of working primarily for corporate clients. Several had added consulting to their portfolios while others were producing income from their own blogs. About half were now writing more for online than print pubs. While they continued to freelance, several had launched other, non-writing-related businesses.

It's true that nearly all of them were still doing some type of work they did a decade ago. But more important, nearly all were doing work they didn't do a decade ago. By continuing to adapt to the ever-changing freelance marketplace, they've continued to sustain successful careers. That's advice worth following wherever you are in your freelance career.

**This post drawn from Six-Figure Freelancing: The Writer's Guide to Making More Money, Second Edition. If you've heard of this freelancing classic (that's long since been out of print), you'll find the updated, expanded version well worth the $9.99 you'll spend for the ebook.
Posted by Unknown at 5:18 AM