Have a Backup Plan: Five Tips Especially for Freelancing Parents 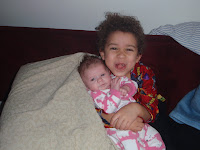 I hope you enjoyed my five-part "Blast from The Past" series last week. I'll repeat it in the future so you can see what hasn't worked and why. Today's post is especially for freelancing parents, and was inspired by a sick sitter crisis last week:

Sure, I believe in planning my day. But often those plans go awry. Then what?

Say you get an urgent call from a client who needs edits on a piece you finished weeks ago--and he needs it today. Or you were supposed to conduct a critical interview for a profile you’re writing, and now your source has gone AWOL. Or my favorite (not really)--you’re a parent with a sick kid, or a sick babysitter.

As a working parent, I’ve faced the sick kid/sick babysitter scenario multiple times--including three days a week where my sitter was home with the flu. I may not have been quite as productive those days, but I’ve tried multiple techniques to parent and work simultaneously--and have never missed a deadline as a result. I have:

• Let my son watch TV. As in, as many episodes of Blue’s Clues, Dora the Explorer, or Top Gear (depending on his age) as he wants. A day or two of Ryan gazing open-mouthed at the “magic box” isn’t going to kill him.

• Allowed my toddler-aged daughter play with forbidden "toys." Unlike her brother, Haley isn’t interested in TV yet. She loves, however, playing with anything she’s not supposed to have. So I get out my office supplies (padded envelopes are a fave of hers), an outdated cell phone, an old remote control--anything that looks like a "no-no" and is therefore fascinating--and let her go nuts. It’s good for ten to fifteen minutes of work time before I find something else for her.

• Made the most of nap time. While it’s a lot harder to entertain a toddler than an older kid, toddlers still nap. So when she goes down, I use that 90 minutes or so to write as much as I can after a quick check of my email. An encroaching deadline makes me write even faster.

• Gotten out of the house. Haley is still too young to run around the park without me keeping a close eye on her, but before she was born, I would take Ryan to the park or to a McDonald’s play land and tuned out the screaming children while I worked. I actually wrote the draft of this post at the YMCA while my kids played in the Strong Kids Zone, the Y’s babysitting room.

• Called on a friend. When I’m truly desperate, I will call one of my fellow moms and ask to dump my kids on them for a few hours. This is a last resort, but I know I can if I must. (And I’m willing to return the favor. I can watch my friends’ kids whether I’m working or not. Normally when I’m working, my sitter is here. So she does the child-tending. Otherwise, I’m in mommy-mode anyway so a few additional children doesn’t make a difference to me. Any mom of more than one child will tell you the same thing.)

Get the idea? Crises will arise, and the more children or family responsibilities you have, the more of them you’ll encounter. Be a Boy Scout, and be prepared to make your day work, however you can. You can make up for your lost productivity tomorrow.
Posted by Unknown at 6:29 PM