Blast from the Past, Take 5: An Essay That *Did* Sell--and Why 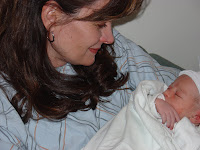 So, last post, I shared an awful "essay" that didn't sell--and I think it's easy to see why. Now here's one that did sell--and got a lot of positive feedback as well. It's also been reprinted four times--it's an evergreen subject for parenting magazines as you'll see.

One of the keys to writing a success essay is to take something specific (i.e. an experience that you've had) and making it universal. You can't just write about what's happened to you (see my candy essay); you have to address a larger topic that will make readers relate to the piece. See what you think of this essay; again, my comments are in green:

I'm Having a Baby (Really!)

I’m having a baby.

Not that you would know it to look at me. My stomach, while not exactly flat, lacks that telltale baby bulge. But I am having a baby. I just don’t know when. [Attention-getting lead. I still like this one a lot.]

My husband and I are adopting, and while the physical symptoms of pregnancy may be absent, the reality that we’re going to be parents is beginning to set in. We’re talking names, looking at cribs, and admiring tiny little onesies in gender-neutral shades.

But as we examine car seats and strollers and changing tables, I find I feel like an imposter. I don’t have the burgeoning belly or giveaway glow that the other future mommies do. Our child isn’t growing inside me. We don’t even know when to expect her—or him. We just know a baby is coming. [Note the specific details in the foregoing paragraphs. Specifics are always better than generalities.]

Erik and I have endured years of well-meaning questions about whether we want kids. Well, yeah. A couple of years of trying the old-fashioned way led to fertility drugs, surgeries, and interventions that eventually culminated in five rounds of in vitro. I got pregnant several times, only to miscarry.

During that six years, we withdrew from the world. Only our closest friends knew what we were going through, but even they couldn’t understand the pain we were experiencing. Why I couldn’t go to a baby shower. Why I pointedly ignored pregnant women anywhere I saw them. Why I couldn’t bear to even look at a baby. [The previous two paragraphs do more than give our history; they talk about the grief we were going through. And even people who haven't gone through infertility will have experienced something similar in their lives--striving for something you truly want and failing.]

Over time, my hope to carry a biological child begin to dim. But my desire to be a mommy was growing stronger. For most people, pregnancy and parenthood are irretrievably linked. Others realize that giving up one needn’t negate the other. I’ll never carry a child or see my belly swell or feed my baby at my breast. But is that really what being a parent is about? [This paragraph actually contains the seed for at least one more essay, maybe more--what it means to be a parent. I actually wrote and sold a later piece on the traits Ryan has "inherited" from me, even though he's not my biological child.]

I gave up my pregnancy fantasy and focused on becoming a mom. My husband and I met with social workers, filled out reams of paperwork, and took a ten-week parenting class. We were fingerprinted, our backgrounds checked, our mental and physical health examined, our house inspected. [Again, specific details!]

We spent hours writing a “dear birth parents” letter, trying to put into words our desire to be parents, choosing photos that reflect our responsible yet fun-loving selves, promising love, time and attention along with baby swim classes and homemade chocolate chip cookies. We started advertising. We received our license to adopt. And we waited. [Details...and another essay here, too.]

Our baby could be born any day! We knew it could happen that fast. But I couldn’t share our excitement with the world. There was no swollen abdomen, no due date to circle on the calendar. Sure, we’d tried to have a baby for years. But now we really were! And yet our baby felt like a secret.

At a conference out of town, I realized people wouldn’t know—unless we told them. So I started spreading the news. I announced to long-distance friends I saw only once a year, “I have big news. I’m going to be a mom!” Then I started telling business colleagues at the conference. Then I told anyone who would listen. [It's human to want to share excitement with our friends and family, whether it's about having a baby, falling in love, or getting a much-wanted job or award. Again, it's a universal emotion even if you haven't been in the shoes of a prospective adoptive parent.]

And people were thrilled. I was congratulated, hugged, blessed. I met moms, dads, aunts, and grandpas who had adopted children. I met adopted adults who told me how happy they were for me. With each good wish, each kind word, my baby become more real. I didn’t realize how healing the joy I had experienced was until I got on the plane to return home. [Demonstrating the specific is also the universal--and showing how many people are impacted by adoption.]

The man sitting directly behind me was holding a newborn—six weeks, I overheard him say. When I got up, I saw him, and for the first time in years, I could look at a baby. I could admire the tiny body, the feathery eyelashes, the loosely clenched perfect fingers without feeling that awful mix of desire, jealousy, and sorrow. I gazed at this little tiny little person, utterly and completely asleep, and for the first time, I wasn’t reminded of what I had lost or would never have. Instead I saw hope, and joy—and certainty. [Lots of details and I think I did a good job of describing emotions without being melodramatic.]

And I thought, I’m getting one of those! [I set this off as its own paragraph to make it "pop." I think it does.]

“He’s beautiful,” I told the baby’s father, who looked up at me and smiled. And ours will be too. [I like this close--goes back to the beginning of the essay and gives the piece of sense of closure.]

Readers, what do you think? Can you see how much stronger this piece than the earlier essay--and why it sold?

**And by the way, Ryan was born just a few weeks after this piece was first written. And he was just as beautiful as I expected. His little sister, Haley, who came along four and half years later, is too. :)