The Power of Example--or, One Reason I Talk about Money 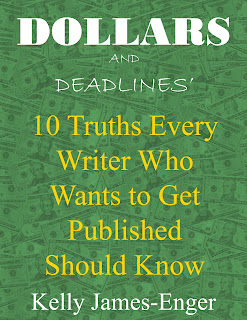 I started my freelance career with little more in mind than to escape the law. Sure, I had a financial goal (I wanted to make at least $10,000 my first year of freelancing full-time), but I didn't have much of a business plan. It wasn’t like I decided to freelance and then took a few business classes online or anything. Fact is, I had no business plan. But I did have a lot of energy, motivation, and drive, which certainly helped.

While I lacked a business plan, I did set specific goals to keep myself on track. I sent out at least one query or essay submission every day, five days a week. When I received a rejection (what I call a "bong"), I sent a new query to the market that had rejected me, and eventually started getting assignments from markets like Bridal Guide, Fit, Fitness, Shape, and Family Circle. I also broadened my scope, and started writing for the local hospital and small area businesses as well. By my fourth year, I was making more than $60,000/year and was confident that I could sustain a successful career as a self-employed writer.

Still, I had no idea I could make even more money than that. I was already making more than I had as an (admittedly underpaid) lawyer and I realize now it didn't occur to me that I could continue to increase my income, and make, say, six figures.

Then I met another writer who made six figures regularly. And she wasn't a better writer than I was. She wasn't any more professional about her career than I was. And she didn't have that much more experience than I did. I remember thinking, hey, if she can make six figures, why can't I? Two years later, I cracked the six-figure mark (and wound up writing a book on six-figure freelancing along the way!).

That's the power of example. When you see someone else reaching a goal (especially someone similar to yourself), you're more likely to believe that you can do the same thing. That's one reason I'm open about the financial aspects of my writing career, whether it's sharing what I made last year, surveying freelancers about their income, explaining the difference between print and electronic royalties, or how many copies of a POD book I've sold. As the saying goes, information is power but information is motivation, too. My hope is that by seeing what I've done (or what other successful freelancers have done), you'll be empowered to reach your own writing goals.

***My ebook list keeps growing! I've now added a new book designed for new writers who want to make the leap from unpublished to published--whether you write essays, short fiction, or articles. Dollars and Deadlines' 10 Truths Every Writer Who Wants to be Published Should Know will help you make the transition from writing for yourself to writing for publication.

If you know you want to focus on writing articles, you'll want to check out Dollars and Deadlines' Guide to: Selling your First Article, which takes away the mystery of getting published for the first time. Dollars and Deadlines' 10 Essential Freelance Templates includes the 10 templates you'll use the most often as a freelancer and describes when to use them.
Posted by Unknown at 1:35 PM